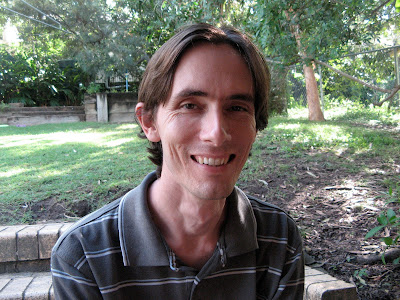 (Photo by Amelia Kemble. Hi-res version at Flickr)
Hi, I am a writer, journalist and blogger based in Brisbane, Australia. If you’re reading this bio much after September 21, 2010, please email me for something more up-to-date.

I've written stories all my life. While I identify myself as a 'horror' writer (or more broadly a speculative fiction writer) I've had a variety of stories published, including literary, romance and thriller. I do love horror, zombies in particular, and I think I identify with the 'outsider' status that comes with focusing my writing on the dark side.

I had my first short story win on September 10, 2001. Since then, my short fiction has been published in magazines, anthologies and online in Australia, the US and the UK. Zombie schlockfest 'Dead Air' was picked up by Australian Dark Fantasy and Horror and received an honourable mention in the 21st Years Best Fantasy and Horror.

I've had two wins in the One Book Many Brisbanes competition. Time travel story 'Untethered' won in 2007 and sf/horror tale 'Bug Hunt' in 2009.

'Feast or Famine' - the story of two Australian journalists trapped in a bunker in Afghanistan - has been published in the landmark Australian horror anthology Macabre: A Journey Through Australia's Darkest Fears.

I work as a journalist for ABC News Online, where my roving brief includes coordinating ABC News's social media strategy.

In 2005 I helped establish Articulate, the ABC’s arts weblog, and was an active contributor until the blog's demise earlier this year, mostly covering the speculative fiction beat. I am now a sometimes contributor to The Buzz. My non-fiction has also been published in Black: Australian Dark Culture and Writing Queensland magazine.

In 2010 I blogged AussieCon 4, the 68th World Science Fiction Convention, thanks to help from Arts Queensland.

In 2006 I blogged Conjure, the 45th National Science Fiction Convention. My coverage of speculative fiction in both Articulate and ABC News Online has been twice nominated for the Ditmar Award for Professional Achievement.

In 2007/08 I was on the judging panel for the Australian Shadows award, the top award for Australian writers of dark fiction and horror.

I am a member of the Australian Horror Writers Association, Vision Writers and the Queensland Writers Centre.
I live in Brisbane's leafy western suburbs with my wife and two children.
Posted by Unknown at 8:58 pm

Gary Kemble is a writer, journalist and blogger based in Brisbane, Australia.
Read more...